Want to listen to the audiobook A Girl Named Carrie: The Visionary Who Created Neiman Marcus and Set the Standard for Fashion written by Jerrie Marcus Smith?
MP3 Audiobook Player is here to help! 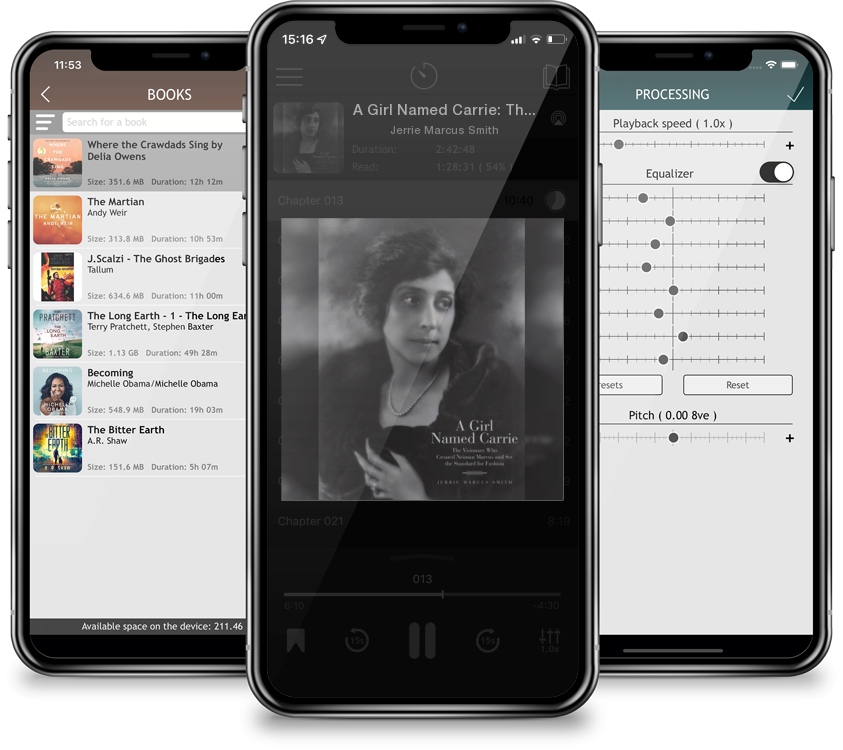 A Girl Named Carrie: The Visionary Who Created Neiman Marcus and Set the Standard for Fashion

Jerrie Marcus Smith remembers her great aunt Carrie as a humorless woman who always wore black and who, Jerrie says, “scared me to death.” Only as an adult did Jerrie grasp the impact of Carrie Marcus Neiman. Along with her brother, Herbert Marcus Sr., and her husband A.L. Neiman, Carrie co-founded in 1907 the famed Neiman Marcus department store in Dallas, Texas.Carrie played an integral role in the store’s success, despite having three strikes against her: she was a woman, she was Jewish, and (after her husband’s illicit relationship with a second-floor saleswoman) she was divorced. Yet with impeccable taste and exemplary manners, she traveled as a buyer to New York in the 1920s (without a man!) and, as Jerrie says, “was nobody’s pushover.”Carrie was self-taught and never attended college. Her only pregnancy ended in miscarriage; she worked at Neiman Marcus until her death at age 66. Yet through memories shared by her father, the late Neiman Marcus legend Stanley Marcus, as well as through spellbinding interviews with long retired salespeople, Jerrie has felt inextricably tied to Carrie. Each recollection of Aunt Carrie, each remembrance, each detail melted away Jerrie’s childhood fear of the stern woman in black, leaving in its place a colorful portrait of a person to be admired, to be loved and—perhaps most of all—to be shared. “This captivating portrait of a strong and elegant woman will take you through fashion into the journey of a changing America and the birth of its most prestigious store, Neiman Marcus.”—Diane von Furstenberg, fashion designer, philanthropist  “A Girl Named Carrie is essential reading for everyone who admires the establishment and growth of the iconic Neiman Marcus, which set the standard for the American department store era and influenced stores around the world. Carrie Marcus Neiman was present at the creation and established the essential concepts that remain today. Yes, it’s a must-read!”—Leonard A. Lauder, Chairman Emeritus, The Estée Lauder Companies Inc. "There are reasons why LIFE magazine sent some of its most celebrated photographers to capture the world of Neiman Marcus and the waves it created in American culture, fashion, and business. A Girl Named Carrie shows us all of them."—Bill Shapiro, Former Editor-in-Chief of LIFE magazine “Carrie Marcus Neiman—A Female Founder and Chair of the Board long before this was even a dream of women. As the co-Founder of Neiman Marcus, she brought contemporary styles of Ready to Wear to women who had always had tailor-made clothes. She was a true disruptor in the industry and a constant inspiration to me as the next female CEO of the company 103 years later. “—Karen Katz, Former CEO Neiman Marcus Group “Thoughtful and evocative, A Girl Named Carrie tells the often remembered but never-before recorded history of Carrie Marcus Neiman. As an arbiter of taste and supporter of culture, “Aunt Carrie” not only brought clothing from New York and Paris to Dallas but placed Dallas alongside those two cities as an international fashion mecca. Her uncompromising standards for production and well-informed style established ready-to-wear as an accepted way to dress, her fastidious attention to detail created an expectation for customer service still appreciated by Neiman Marcus customers today, and her leadership as a businesswoman in the early twentieth century stands as a feminist example. Followers of fashion and appreciators of culture owe a debt of gratitude to this remarkable woman, whose story is beautifully told and illustrated here!”—Annette Becker, Director, Texas Fashion Collection, University of North Texas “Lovely writing! Bountiful visuals! A fascinating read!”—Jeffrey Banks, fashion designer and author“In A Girl Named Carrie Jerrie Marcus Smith has captured not only a powerful personality but also a pivotal moment in a city, a family and, above all, in American retailing. Carrie Neiman invented the specialty store, along with her husband, Al, and brother, Herbert Marcus. They called it Neiman Marcus, and it was born to be elegant but different from other emporiums, more daring, more imaginative, more attuned to fashion as a harbinger of the future as well as a talisman for its own time. All three, still in their 20s, were central to the enterprise, but without the taste, talent and foresight of Carrie Neiman, ﬁrst and always chief buyer, the guys, good as they were at ﬁnance and promotion, would have had nothing to sell. Justiﬁably, the stores—eventually plural—have been known by her name, Neiman’s. This is a fascinating tale told with clarity, honesty, style and ﬁnesse by a great-niece who grew up in the glory days of Neiman Marcus. Also, the photographs are dazzling.”—Lee Cullum, Journalist and Senior Fellow, John G. Tower Center for Public Policy and International Affairs, SMU “What a lovely and lively tribute to one of high fashions secret weapons, Ms. Carrie Neiman! A rare one-of-a-kind visionary, Ms. Neiman reshaped fashion retailing with ideas and pleasures that are still inﬂuential today. After years in the shadows it makes me very happy that she is being celebrated for the ingenuity and grace she brought to Neiman Marcus and all of us that visited it.”—Todd Oldham, Designer and Honorary Doctorate of Fine Arts by RISD