Want to listen to the audiobook A Reluctant Prosecutor: My Journey written by Creighton C. Horton II?
MP3 Audiobook Player is here to help! 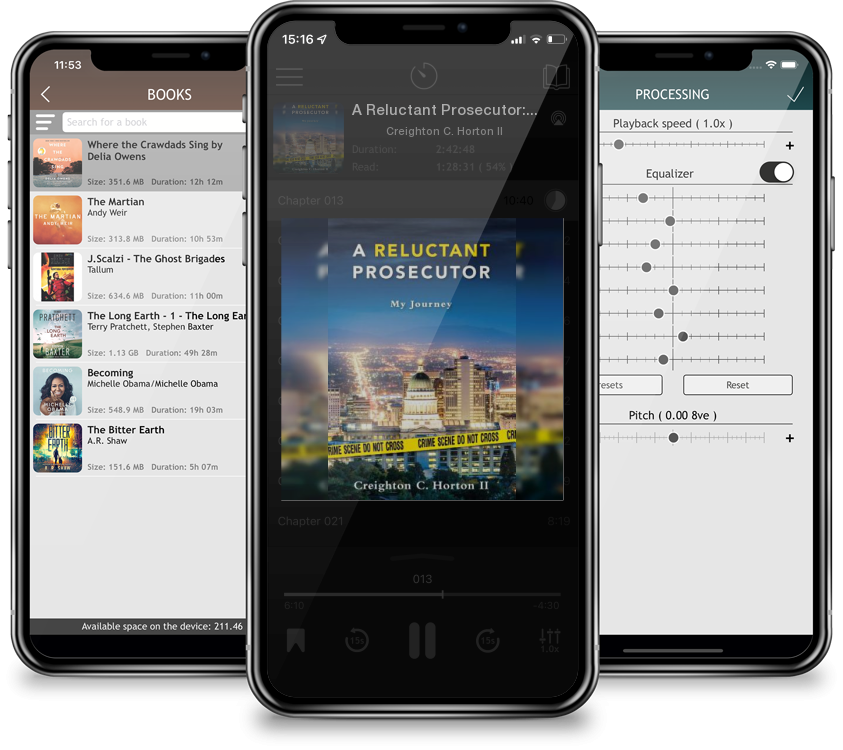 A Reluctant Prosecutor: My Journey

Creighton's first love was always music, but after college he found himself performing in courtrooms rather than on stages or in concert halls. Inspired by the portrayal of Atticus Finch in the movie To Kill a Mockingbird, he went to law school to become a defense attorney, but his career path took an unanticipated turn. For nearly three decades, Creighton prosecuted many of Utah's most notorious criminal cases - cases which drew widespread press attention at the time. Now, in A Reluctant Prosecutor, he recounts his personal journey through Utah's criminal justice system, with some fascinating twists and turns, and some unforgettable characters. You'll read about bombings, murders, political intrigue, public corruption, polygamists, imperious and eccentric judges, capital cases, con men, overreaching cops, venal public officials, and innocent people convicted of murders they didn't commit. Throughout the book, Creighton explores aspects of the high-profile cases he prosecuted that were never publicly reported, and he delves deeply into the ethical issues surrounding justice, crime and punishment. What Others Say: "Creighton Horton's account of his life as a prosecutor is a gripping, powerful, and authentic tale that should resonate with all types of readers. Prosecutors are supposed to be ministers of justice but, in my experience, they often fall short of that standard. But Creighton Horton walked the walk. He was one of the most noble prosecutors I have ever met, and his memoir is essential reading for those of us concerned with and committed to justice." - DANIEL S. MEDWED, author of Prosecution Complex - America's Race to Convict and Its Impact on the Innocent, and Professor at Northeastern University School of Law "A remarkable story, written by a remarkable person, about what inspires him, what troubles him, and what led him to take up a decades-long career as a prosecutor." - DAVID SCHWENDIMAN, lead prosecutor of the European Union's Special Investigative Task Force investigating crimes against humanity in Kosovo. "You'll be hooked instantly by this riveting insider look at prosecutors and their surprising power for good. Wow " - BARBARA OAKLEY, author of the New York Times science bestseller A Mind for Numbers, and instructor of Learning How to Learn from Coursera, the world's largest and most popular online course "This book is a profound look at the internal work of a prosecutor driven by a passion to do justice and make the world a better place." - MICHAEL D. WIMS, author of How to Try a Murder Case, Pretrial and Trial Guidelines for Prosecution and Defense, and former prosecutor, appellate defense counsel, and judge "Creighton Horton is a natural -- and national -- leader among prosecutors. His genuine interest in putting fairness, truth, and justice first resonates throughout his memoir and his life. This is a book every criminal justice official and lawyer should read." - KATIE MONROE, leading innocence advocate, former director of the Rocky Mountain Innocence Center, and current director of the Healing Justice Project "I have little doubt that my and my family's ordeal ever would have occurred if the Rhode Island State Police's single and focused investigation had landed on Creighton's desk for review." - SCOTT HORNOFF, former Rhode Island Police Officer, who was wrongfully convicted of murder and sent to prison in 1996, and exonerated six year later when the actual murderer came forward and confessed to the crime