Want to listen to the audiobook A Talk in the Park: Nine Decades of Baseball Tales from the Broadcast Booth written by Curt Smith?
MP3 Audiobook Player is here to help! 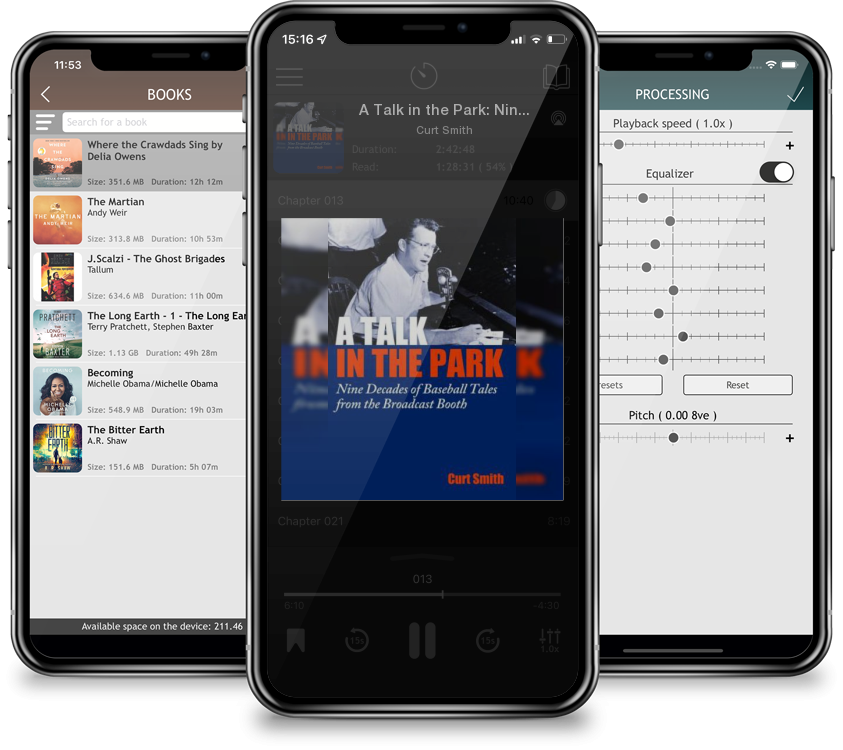 A Talk in the Park: Nine Decades of Baseball Tales from the Broadcast Booth

Since radio's debut in the 1920s and television's in the ’30s, the baseball announcer has become entertainer, observer, and extended member of the family. In A Talk in the Park: Nine Decades of Baseball Tales from the Broadcast Booth, many of the pastime's most popular and famous announcers—the Voices—tell their favorite stories in their own distinctive words. It is riveting oral history.Herein is the largest total of active and retired broadcasters featured in any sports book: 116. Its radio and TV tales include every major-league team and such networks as ESPN, Fox, TBS, and the new MLB channel, and capture the Voices commenting on ballparks, managers, the characters of the game, umpires, special teams, interleague play, improvements to the game—and on one another, including the beloved Ernie Harwell, who died in 2010 and to whom the book is dedicated.Here are Bob Wolff airing the longest-ever wild pitch Howie Rose using the 1969 Mets to pass a high school exam, and Charley Steiner telling why George Steinbrenner "hired" Jason Giambi. Denny Matthews recalls George Scott’s faux uniform number 6-4-3. Ken Harrelson defends his one-handed catch: "With bad hands like mine, one hand was better than two." Eduardo Ortega announces for his mother, who is deaf. Pat Hughes remembers when Harry Caray called a game with a tea bag dangling from his ear. Voices hail Lou Piniella: dressed, undressed, volatile, and lovable.Columnist Christine Brennan says of author Curt Smith: "No one knows baseball broadcasters as well as he does." In particular, A Talk in the Park addresses trends of the past two decades—the rise of Hispanic and other minority announcers, interleague play, ex-jocks' warp-speed climb, whiz-bang technology, 24/7 coverage, and the evolution of broadcasting, from radio to network television to cable. Told by baseball's leading broadcast historian, endorsed by the National Baseball Hall of Fame and the National Radio Hall of Fame, and starring announcers who reach millions, A Talk in the Park brilliantly relates what baseball was, is, and is likely to become.