Want to listen to the audiobook Amedeo: The True Story of an Italian's War in Abyssinia written by Sebastian O'Kelly?
MP3 Audiobook Player is here to help! 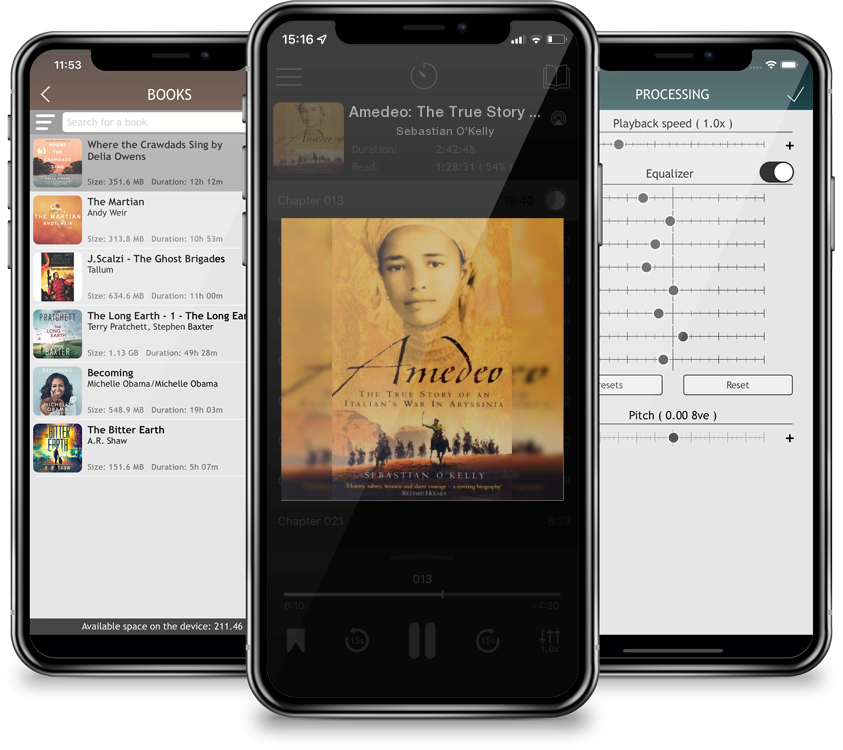 Amedeo: The True Story of an Italian's War in Abyssinia

War-time love story set in Abyssinia, Eritrea and the Yemen 1935-1945. Amedeo Guillet is still alive and living in County Meath, Ireland. Khadija is lost.This is the story of Amedeo Guillet - an Italian calvary officer who was sent out to Abyssinia as part of Mussolini's army to establish and command a troupe of 2,000 Spahis - or Arabic calvary. He met and fell in love with Khadija - a beautiful Ethiopian Muslim. Together they held up the British lorries heaving up the mountain road to Asmara and blew up the important Ponte Aosta. Eventually captured, Amedeo went on the run disguised as an Arab, eventually making it to Yemen, only to be thrown in jail.This is a rare view of the Second World War from an Italian perpective; particularly valuable are the chapters that tell the story of Italian resistance to the Nazis, and their subsequent withdrawal from Italy in 1943.There are few stories more cinemagraphic than this - Fascist Italy, his early years in Ethiopia commanding the Cossack-like Spahis, the brutal Abyssinian war waged by the Duce, Italian and British colonial rivalry; Amedeo led the last ever cavalry charge the British army faced (Eritrea 1941 - they were massacred by tanks and sub-machine guns), defeat and guerrilla warfare against the British; then flight, disguised as an Arab, imprisonment in the Yemen and a great love lost as he leaves his beloved Khadija behind to face her future alone and returns to Italy, to his fianc e and a career as a distinguished Italian diplomat and Arabist.Amedeo is still alive and living in County Meath, Ireland. Sebastian O'Kelly is a journalist for the Mail and Telegraph and has Amedeo's full co-operation in writing this book.This is a very valuable and absolutely stunning story, beautifully told by O'Kelly.