Want to listen to the audiobook Blood, Sweat, Gypsies and Dreams written by David J. Scott?
MP3 Audiobook Player is here to help! 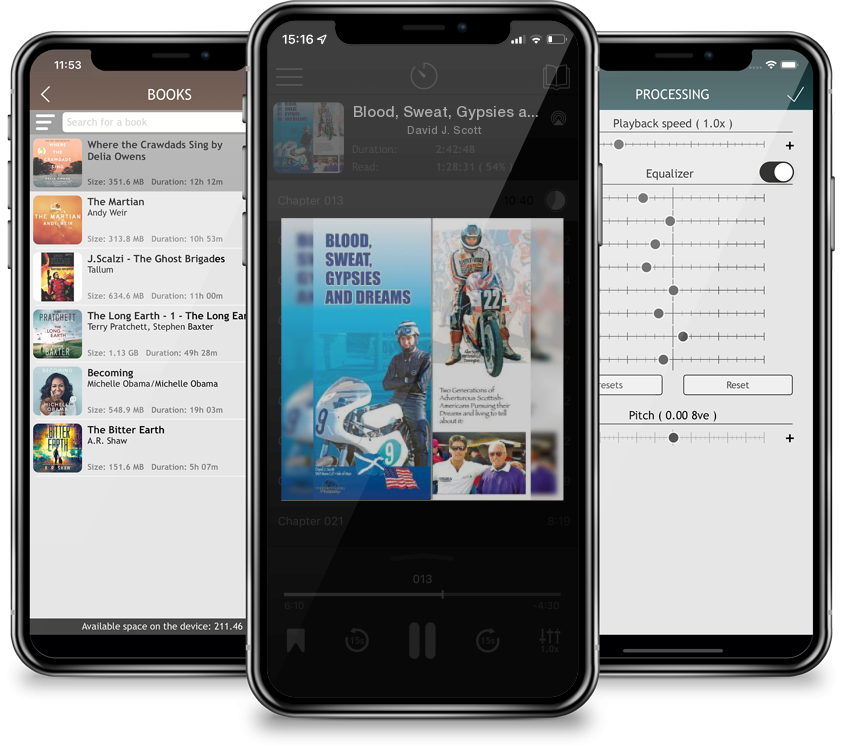 Scotty, a hardy little Scotsman raised in the tenements of Glasgow, grew up during the murky days of World War II, under the stern upbringing of his Grandparents. A good student, he always believed that there had to be a better life out there, compared to the drudgery endured by average working class Glaswegians, and he set out to find it. His skill riding racing motorcycles brought him to America, where a series of remarkable connections, propelled him to the top of his field. His success did not come easy. Good times were often followed by disaster and tragedy, but throughout his adventurous quest for his dream, he always managed to recover, many times helped by friends all over the world. This book will take you with Scotty on his improbable journey across the world, through countless hardships and obstacles. Yet he will survive all, to tell a tale that is humorous and absolutely true.....Join Scotty on his real-life adventure. This is not just about racing motorcycles, it is about a real life lived on the edge. Why did Scotty choose the title, "Blood, Sweat, Gypsies and Dreams"?....Let's let Scot- ty tell you in his own words: "There are two main characters in this story, who form the basis for the book, my son Allan Scott and myself, Davie Scott. Both of us BLED profusely, at one time or another, during our separate careers, but kept on going regardless. We also SWEATED like crazy, sometimes in sheer fear of the race ahead, but mostly just before the bills were due to be paid Why GYPSIES, you may ask? We never considered ourselves to be Gypsies, Travelers, Tinkers, Romany's or the like. We were just privateer racers, without whom there would have been no racing grid back in those days. But we were none the less, christened by Bernie Ecclestone, at a wet Belgian Grand Prix he promoted, and that designation remained with us for the duration The DREAMS part? This was the whole essence of my personal life story, and I passed it along to my son Allan. Can a human.