Want to listen to the audiobook Captain Fantastic: Elton John's Stellar Trip Through the '70s written by Tom Doyle?
MP3 Audiobook Player is here to help! 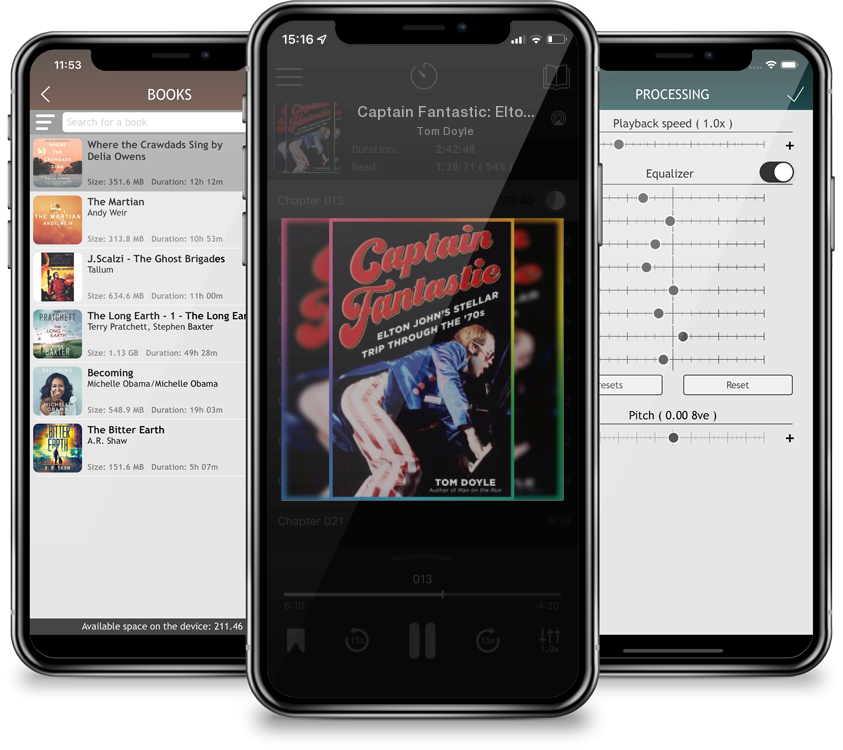 Based on rare one-on-one interviews with the flamboyant rock ’n’ roll icon, this is the first book to trace Elton John’s meteoric rise from obscurity to worldwide celebrity in the wildest, weirdest decade of the twentieth century. In August 1970, Elton John achieved overnight fame with a rousing performance at the Troubadour in Los Angeles. Over the next five years, the artist formerly known as Reginald Dwight went from unheard of to unstoppable, scoring seven consecutive #1 albums and sixteen Top Ten singles in America. By the middle of the decade, he was solely responsible for 2 percent of global record sales. One in fifty albums sold in the world bore his name. Elton John’s live shows became raucous theatrical extravaganzas, attended by all the glitterati of the era. But beneath the spangled bodysuits and oversized eyeglasses, Elton was a desperately shy man, conflicted about his success, his sexuality, and his narcotic indulgences. In 1975, at the height of his fame, he attempted suicide. After coming out as bisexual in a controversial Rolling Stone interview that nearly wrecked his career, and announcing his retirement from live performance in 1977 at the age of thirty, he gradually found his way back to the thing he cared about most: the music. Captain Fantastic gives readers a behind-the-scenes look at the rise, fall, and return to glory of one of the world’s most mercurial performers. Rock journalist Tom Doyle’s insider account of the Rocket Man’s turbulent ascent is based on a series of one-pn-one interviews in which Elton laid bare many previously unrevealed details of his early career. Here is an intimate exploration of Elton’s working relationship with songwriting partner Bernie Taupin, whose lyrics often chronicled the ups and downs of their life together in the spotlight. Through these pages pass a parade of legends whose paths crossed with Elton’s during the decade—including John Lennon, Bob Dylan, Groucho Marx, Katharine Hepburn, Princess Margaret, Elvis Presley, and an acid-damaged Brian Wilson. A fascinating portrait of the artist at the apex of his celebrity, Captain Fantastic takes us on a rollicking fame-and-drug-fueled ride aboard Elton John’s rocket ship to superstardom.Praise for Captain Fantastic“Veteran rock journalist [Tom] Doyle continues his foray into the 1970s music scene with a compelling profile of an unlikely rock star. . . . In chronicling Elton John’s stratospheric rise to fame, replete with platinum records, increasingly outlandish stage shows, and mountains of cash, the author deftly manages to keep his subject in sharp focus. Based on hours of one-on-one interviews with Captain Fantastic himself, this breezy yet comprehensive biography demonstrates what it was like for the talented musician to churn out an impossible string of hit records. . . . A great way to better understand the man behind the garish glasses and platform boots.”—Kirkus Reviews “In this adoring and candid set of fan’s notes, music journalist Doyle (Man on the Run) draws on interviews with John and his colleagues, especially his writing partner, Bernie Taupin, to capture the meteoric rise and fall of the man who released at least one album every year of the 1970s. . . . This energetic book . . . makes a convincing case that John reached his peak and made his best music in the ’70s.”—Publishers Weekly “A breezy and surprisingly poignant romp through a decade, and a career, that effectively invented modern celebrity culture.”—Peter Doggett, author of You Never Give Me Your Money: The Beatles After the Breakup