Want to listen to the audiobook From Holocaust to Hope: Shores Beyond Shores - A Bergen-Belsen Survivor's Life written by Irene Hasenberg Butter?
MP3 Audiobook Player is here to help! 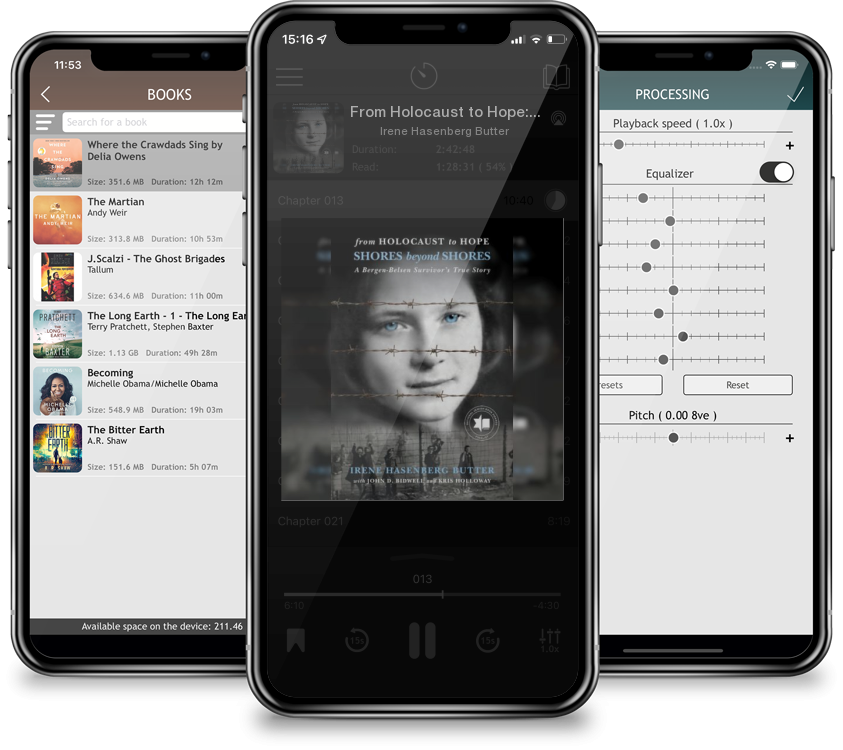 From Holocaust to Hope: Shores Beyond Shores - A Bergen-Belsen Survivor's Life

NATIONAL JEWISH BOOK AWARD FINALIST"Irene Butter's book is a triumph of clarity and concision, written with a passionate intent to inform and with not a shred of self-pity. It is by turns profound and intimate, and bears witness to the resilience of a family who drew strength from one another even through the darkness of the Holocaust. It is a shockingly honest and hopeful book." Andrew Solomon, National Book Award Winning Author of The Noonday Demon and author of Far From The Tree Parent's Children, And The Search For Identity"Irene Butter's story is not your standard holocaust memoir. Instead, it recounts what happened to one family both during and after the war, and captures vividly the time from release from concentration camp to greeting a life back. It is compelling reading, and makes one realise how what happened in the immediate aftermath may have overshadowed the rest of Irene Butter's life.." Rabbi Baroness Julia NeubergerIrene Butter's memoir of her experiences before, during and after the Holocaust is not a recounting of misery and tragedy; rather it is the genuine story of a girl coming to terms with a terrible event and choosing to view herself as a survivor instead of a victim. When the Dutch police knock on their door, Irene and her family are forced to leave their home and board trains meant for cattle. They are taken to Nazi-controlled prison camps and finally to Bergen-Belsen, where Irene is a fellow prisoner with Anne Frank. With limited access to food, shelter, and warm clothing, Irene's family needs nothing short of a miracle to survive. Irene's memoir tells the story of her experiences as a young girl before, during, and after the Holocaust, highlighting how her family came to terms with the catastrophe and how she, over time, came to view herself as a survivor rather than a victim. Throughout the book, her first-person account celebrates the love and empathy that can persist even in the most inhumane conditions.