Want to listen to the audiobook From Slave to Statesman: The Life of Educator, Editor, and Civil Rights Activist Willis M. Carter of Virginia (Antislavery) written by Robert Heinrich?
MP3 Audiobook Player is here to help! 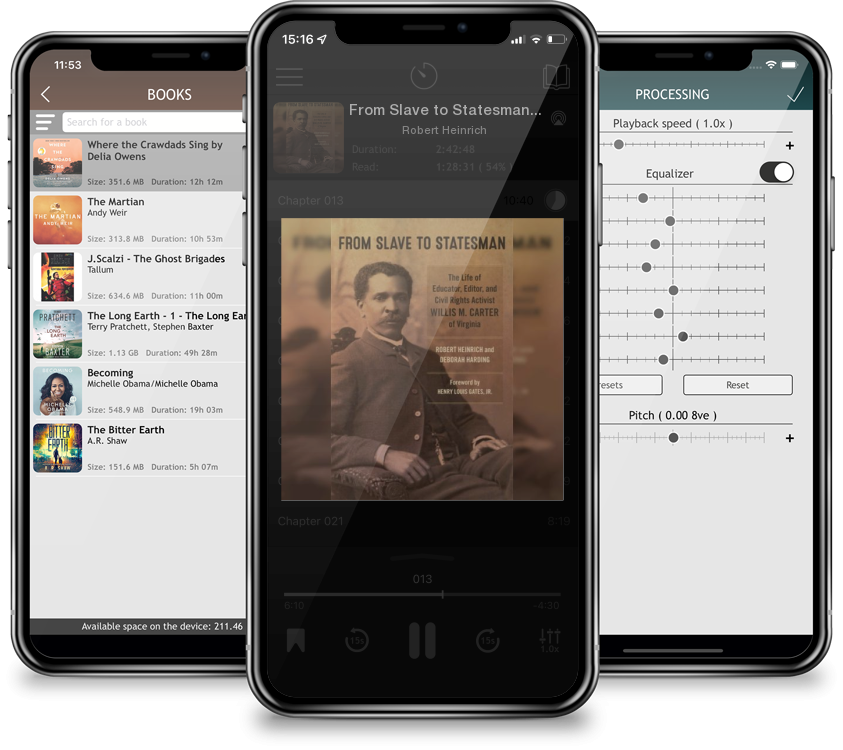 From Slave to Statesman: The Life of Educator, Editor, and Civil Rights Activist Willis M. Carter of Virginia (Antislavery)

In the 1980s, Willis McGlascoe Carter's handwritten memoir turned up unexpectedly in the hands of a midwestern antiques dealer. Its twenty-two pages told a fascinating story of a man born into slavery in Virginia who, at the onset of freedom, gained an education, became a teacher, started a family, and edited a newspaper. Even his life as a slave seemed exceptional: he described how his owners treated him and his family with respect, and he learned to read and write. Tucked into its back pages, the memoir included a handwritten tribute to Carter, written by his fellow teachers upon his death. Robert Heinrich and Deborah Harding's From Slave to Statesman tells the extraordinary story of Willis M. Carter's life. Using Carter's brief memoir--one of the few extant narratives penned by a former slave--as a starting point, Heinrich and Harding fill in the abundant gaps in his life, providing unique insight into many of the most important events and transformations in this period of southern history. Carter was born a slave in 1852. Upon gaining freedom after the Civil War, Carter, like many former slaves, traveled in search of employment and education. He journeyed as far as Rhode Island and then moved to Washington, DC, where he attended night school before entering and graduating from Wayland Seminary. He continued on to Staunton, Virginia, where he became a teacher and principal in the city's African American schools, the editor of the Staunton Tribune, a leader in community and state civil rights organizations, and an activist in the Republican Party. Carter served as an alternate delegate to the 1896 Republican National Convention, and later he helped lead the battle against Virginia's new state constitution, which white supremacists sought to use as a means to disenfranchise blacks. As part of that campaign, Carter traveled to Richmond to address delegates at the constitutional convention, serving as chairman of a committee that advocated voting rights and equal public education for African Americans. Although Carter did not live to see Virginia adopt its new Jim Crow constitution, he died knowing that he had done all in his power to stop it. From Slave to Statesman fittingly resurrects Carter's all-but-forgotten story, adding immeasurably to our understanding of the journey that he and men like him took out of slavery into a world of incredible promise and powerful disappointment.