Want to listen to the audiobook Home: A Memoir of My Early Years written by Julie Andrews?
MP3 Audiobook Player is here to help! 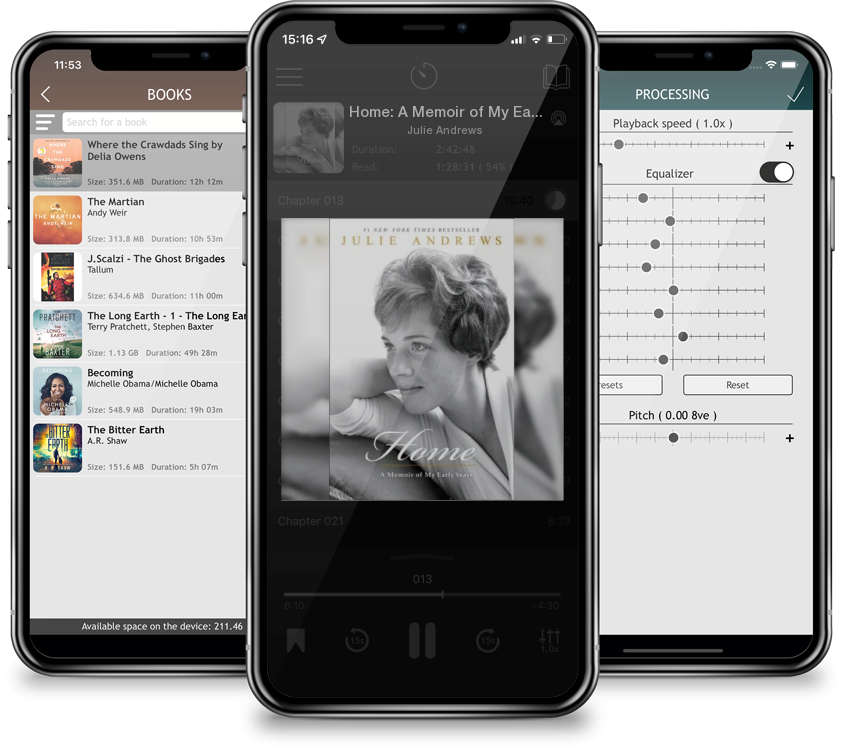 Home: A Memoir of My Early Years

Since her first appearance on screen in Mary Poppins, Julie Andrews has played a series of memorable roles that have endeared her to generations. But she has never told the story of her life before fame. Until now. In Home: A Memoir of My Early Years, Julie takes her readers on a warm, moving, and often humorous journey from a difficult upbringing in war-torn Britain to the brink of international stardom in America. Her memoir begins in 1935, when Julie was born to an aspiring vaudevillian mother and a teacher father, and takes readers to 1962, when Walt Disney himself saw her on Broadway and cast her as the world's most famous nanny. Along the way, she weathered the London Blitz of World War II; her parents' painful divorce; her mother's turbulent second marriage to Canadian tenor Ted Andrews, and a childhood spent on radio, in music halls, and giving concert performances all over England. Julie's professional career began at the age of twelve, and in 1948 she became the youngest solo performer ever to participate in a Royal Command Performance before the Queen. When only eighteen, she left home for the United States to make her Broadway debut in The Boy Friend, and thus began her meteoric rise to stardom.Home is filled with numerous anecdotes, including stories of performing in My Fair Lady with Rex Harrison on Broadway and in the West End, and in Camelot with Richard Burton on Broadway; her first marriage to famed set and costume designer Tony Walton, culminating with the birth of their daughter, Emma; and the call from Hollywood and what lay beyond. Julie Andrews' career has flourished over seven decades. From her legendary Broadway performances, to her roles in such iconic films as The Sound of Music, Mary Poppins, Thoroughly Modern Millie, Hawaii, 10, and The Princess Diaries, to her award-winning television appearances, multiple album releases, concert tours, international humanitarian work, best-selling children's books, and championship of literacy, Julie's influence spans generations. Today, she lives with her husband of thirty-eight years, the acclaimed writer/director Blake Edwards; they have five children and seven grandchildren. Featuring over fifty personal photos, many never before seen, this is the personal memoir Julie Andrews' audiences have been waiting for.