Want to listen to the audiobook Imperfect Union: How Jessie and John Frémont Mapped the West, Invented Celebrity, and Helped Cause the Civil War written by Steve Inskeep?
MP3 Audiobook Player is here to help! 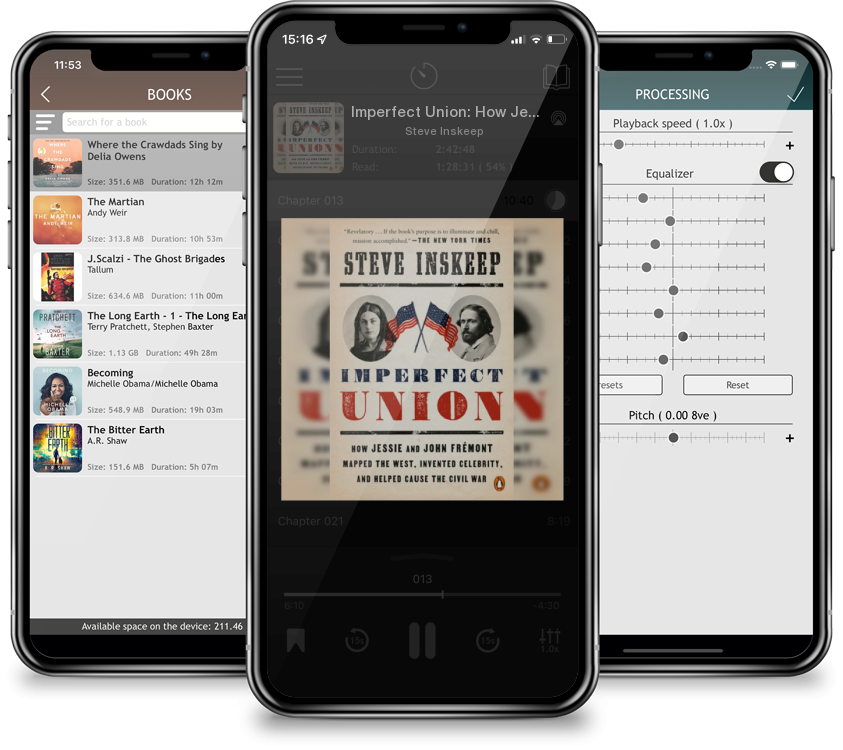 Imperfect Union: How Jessie and John Frémont Mapped the West, Invented Celebrity, and Helped Cause the Civil War

Steve Inskeep tells the riveting story of John and Jessie Frémont, the husband and wife team who in the 1800s were instrumental in the westward expansion of the United States, and thus became America's first great political couple John C. Frémont, one of the United States’s leading explorers of the nineteenth century, was relatively unknown in 1842, when he commanded the first of his expeditions to the uncharted West. But in only a few years, he was one of the most acclaimed people of the age – known as a wilderness explorer, bestselling writer, gallant army officer, and latter-day conquistador, who in 1846 began the United States’s takeover of California from Mexico. He was not even 40 years old when Americans began naming mountains and towns after him. He had perfect timing, exploring the West just as it captured the nation’s attention. But the most important factor in his fame may have been the person who made it all possible: his wife, Jessie Benton Frémont.   Jessie, the daughter of a United States senator who was deeply involved in the West, provided her husband with entrée to the highest levels of government and media, and his career reached new heights only a few months after their elopement. During a time when women were allowed to make few choices for themselves, Jessie – who herself aspired to roles in exploration and politics – threw her skill and passion into promoting her husband. She worked to carefully edit and publicize his accounts of his travels, attracted talented young men to his circle, and lashed out at his enemies. She became her husband’s political adviser, as well as a power player in her own right. In 1856, the famous couple strategized as John became the first-ever presidential nominee of the newly established Republican Party. With rare detail and in consummate style, Steve Inskeep tells the story of a couple whose joint ambitions and talents intertwined with those of the nascent United States itself. Taking advantage of expanding news media, aided by an increasingly literate public, the two linked their names to the three great national movements of the time—westward settlement, women’s rights, and opposition to slavery. Together, John and Jessie Frémont took parts in events that defined the country and gave rise to a new, more global America. Theirs is a surprisingly modern tale of ambition and fame; they lived in a time of social and technological disruption and divisive politics that foreshadowed our own. In Imperfect Union, as Inskeep navigates these deeply transformative years through Jessie and John’s own union, he reveals how the Frémonts’ adventures amount to nothing less than a tour of the early American soul.