Want to listen to the audiobook In Search of a Kingdom: Francis Drake, Elizabeth I, and the Perilous Birth of the British Empire (Large Print / Paperback) written by Laurence Bergreen?
MP3 Audiobook Player is here to help! 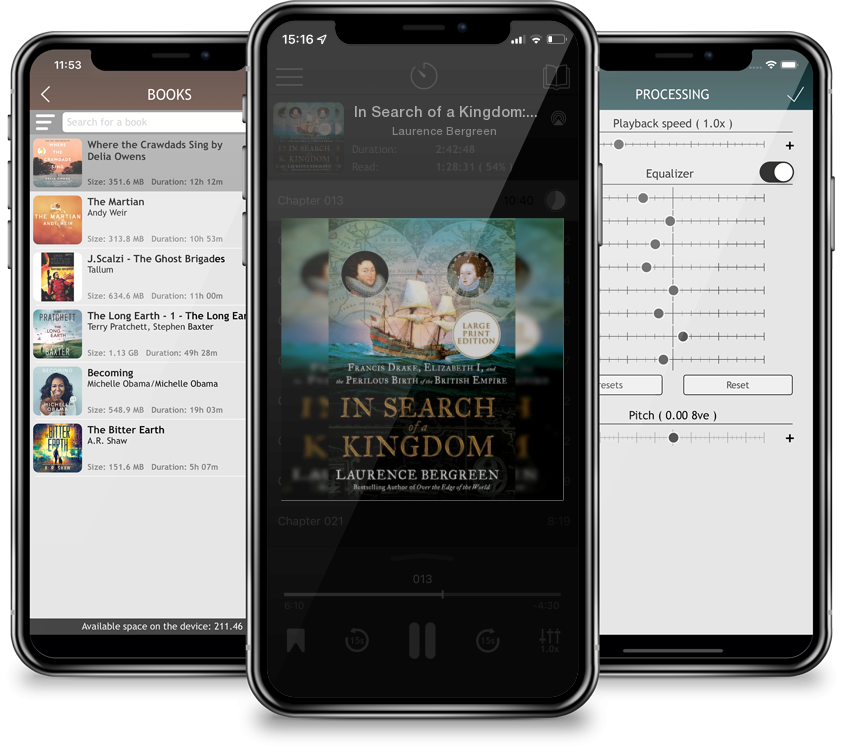 In Search of a Kingdom: Francis Drake, Elizabeth I, and the Perilous Birth of the British Empire (Large Print / Paperback)

“FASCINATING . . . Dramatic and timely.” —New York Times Book Review, Editors' ChoiceIn this grand and thrilling narrative, the acclaimed biographer of Magellan and Columbus reveals the singular adventures of Sir Francis Drake, whose mastery of the seas during the reign of Queen Elizabeth I changed the course of history.“Entrancing . . . Very good indeed.” —Wall Street JournalBefore he was secretly dispatched by Queen Elizabeth to circumnavigate the globe, or was called upon to save England from the Spanish Armada, Francis Drake was perhaps the most wanted—and successful—pirate ever to sail. Nicknamed “El Draque” by the Spaniards who placed a bounty on his head, the notorious red-haired, hot-tempered Drake pillaged galleons laden with New World gold and silver, stealing a vast fortune for his queen—and himself. For Elizabeth, Drake made the impossible real, serving as a crucial and brilliantly adaptable instrument of her ambitions to transform England from a third-rate island kingdom into a global imperial power.In 1580, sailing on Elizabeth’s covert orders, Drake became the first captain to circumnavigate the earth successfully. (Ferdinand Magellan had died in his attempt.) Part exploring expedition, part raiding mission, Drake’s audacious around-the-world journey in the Golden Hind reached Patagonia, the Pacific Coast of present-day California and Oregon, the Spice Islands, Java, and Africa. Almost a decade later, Elizabeth called upon Drake again. As the devil-may-care vice admiral of the English fleet, Drake dramatically defeated the once-invincible Spanish Armada, spurring the British Empire’s ascent and permanently wounding its greatest rival. The relationship between Drake and Elizabeth is the missing link in our understanding of the rise of the British Empire, and its importance has not been fully described or appreciated. Framed around Drake’s key voyages as a window into this crucial moment in British history, In Search of a Kingdom is a rousing adventure narrative entwining epic historical themes with intimate passions.