Want to listen to the audiobook Jungle of Stone: The Extraordinary Journey of John L. Stephens and Frederick Catherwood, and the Discovery of the Lost Civilization of the Maya written by William Carlsen?
MP3 Audiobook Player is here to help! 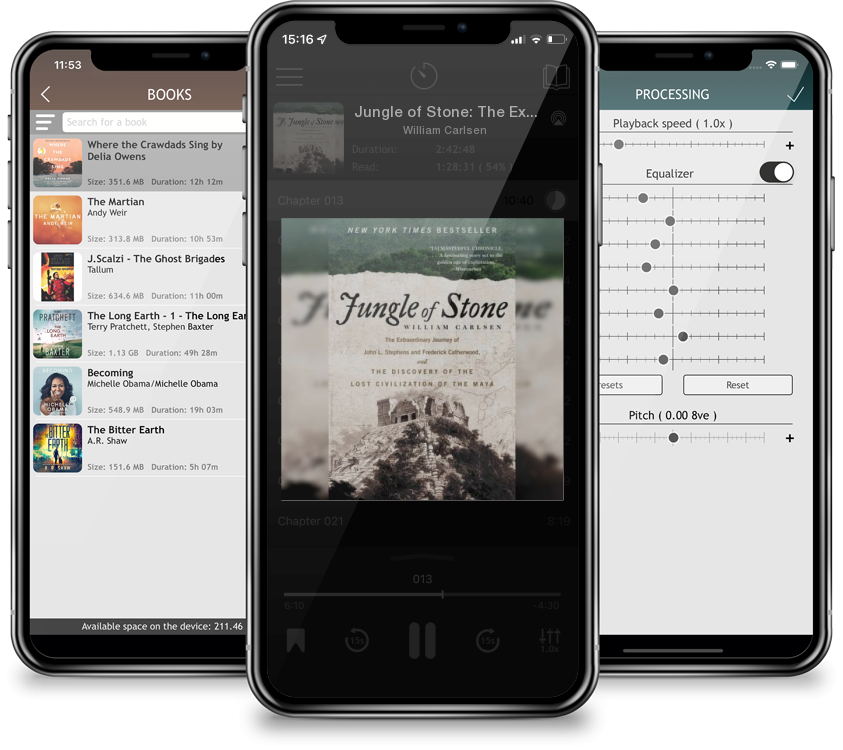 Jungle of Stone: The Extraordinary Journey of John L. Stephens and Frederick Catherwood, and the Discovery of the Lost Civilization of the Maya

NEW YORK TIMES BESTSELLERThe "masterful chronicle" of the discovery of the legendary lost civilization of the Maya and the quest to unlock their secrets. Featuring a history and description of the major Maya sites, including Chichen Itza, Tulum, Palenque, Uxmal, Copan, and more. Illustrated with a map and more than 100 images.In 1839, rumors of extraordinary yet baffling stone ruins buried within the unmapped jungles of Central America reached two of the world’s most intrepid travelers. Seized by the reports, American diplomat John Lloyd Stephens and British artist Frederick Catherwood—both already celebrated for their adventures in Egypt, the Holy Land, Greece, and Rome—sailed together out of New York Harbor on an expedition into the forbidding rainforests of present-day Honduras, Guatemala, and Mexico. What they found would upend the West’s understanding of human history.In the tradition of Lost City of Z and In the Kingdom of Ice, former San Francisco Chronicle journalist and Pulitzer Prize finalist William Carlsen reveals the remarkable story of the discovery of the ancient Maya. Enduring disease, war, and the torments of nature and terrain, Stephens and Catherwood meticulously uncovered and documented the remains of an astonishing civilization that had flourished in the Americas at the same time as classic Greece and Rome—and had been its rival in art, architecture, and power. Their masterful book about the experience, written by Stephens and illustrated by Catherwood, became a sensation, hailed by Edgar Allan Poe as “perhaps the most interesting book of travel ever published” and recognized today as the birth of American archaeology. Most important, Stephens and Catherwood were the first to grasp the significance of the Maya remains, understanding that their antiquity and sophistication overturned the West’s assumptions about the development of civilization.By the time of the flowering of classical Greece (400 b.c.), the Maya were already constructing pyramids and temples around central plazas. Within a few hundred years the structures took on a monumental scale that required millions of man-hours of labor, and technical and organizational expertise. Over the next millennium, dozens of city-states evolved, each governed by powerful lords, some with populations larger than any city in Europe at the time, and connected by road-like causeways of crushed stone. The Maya developed a cohesive, unified cosmology, an array of common gods, a creation story, and a shared artistic and architectural vision. They created stucco and stone monuments and bas reliefs, sculpting figures and hieroglyphs with refined artistic skill. At their peak, an estimated ten million people occupied the Maya’s heartland on the Yucatan Peninsula, a region where only half a million now live. And yet by the time the Spanish reached the “New World,” the Maya had all but disappeared; they would remain a mystery for the next three hundred years.Today, the tables are turned: the Maya are justly famous, if sometimes misunderstood, while Stephens and Catherwood have been nearly forgotten. Based on Carlsen’s rigorous research and his own 1,500-mile journey throughout the Yucatan and Central America, Jungle of Stone is equally a thrilling adventure narrative and a revelatory work of history that corrects our understanding of Stephens, Catherwood, and the Maya themselves.