Want to listen to the audiobook A History of Greek Mathematics, Volume II: From Aristarchus to Diophantus (Dover Books on Mathematics #2) written by Sir Thomas Heath?
MP3 Audiobook Player is here to help! 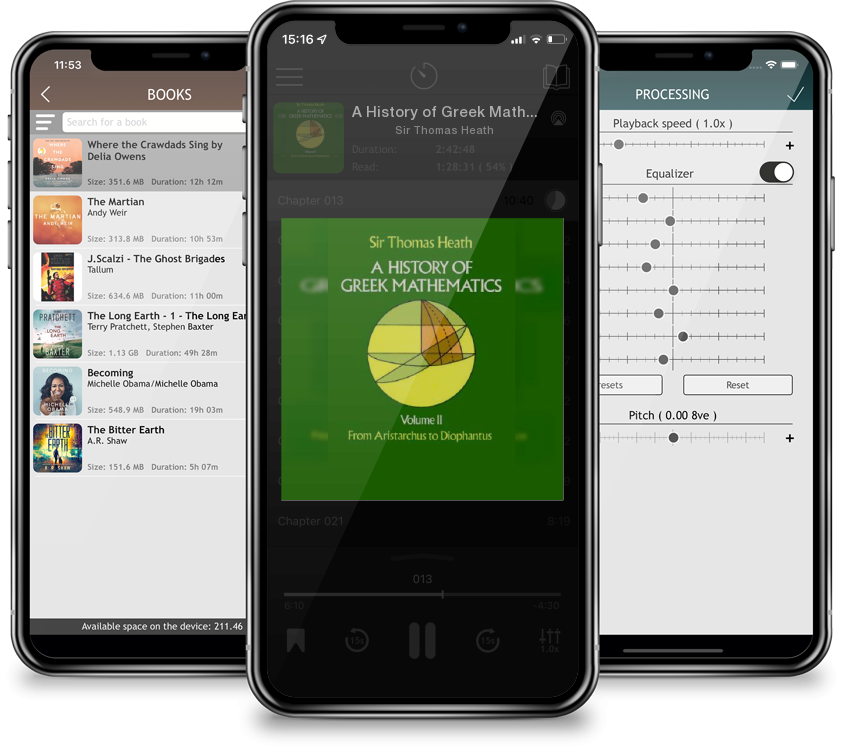 A History of Greek Mathematics, Volume II: From Aristarchus to Diophantus (Dover Books on Mathematics #2)

"As it is, the book is indispensable; it has, indeed, no serious English rival." -- Times Literary Supplement"Sir Thomas Heath, foremost English historian of the ancient exact sciences in the twentieth century." -- Prof. W. H. Stahl"Indeed, seeing that so much of Greek is mathematics, it is arguable that, if one would understand the Greek genius fully, it would be a good plan to begin with their geometry."The perspective that enabled Sir Thomas Heath to understand the Greek genius -- deep intimacy with languages, literatures, philosophy, and all the sciences -- brought him perhaps closer to his beloved subjects, and to their own ideal of educated men than is common or even possible today. Heath read the original texts with a critical, scrupulous eye and brought to this definitive two-volume history the insights of a mathematician communicated with the clarity of classically taught English."Of all the manifestations of the Greek genius none is more impressive and even awe-inspiring than that which is revealed by the history of Greek mathematics." Heath records that history with the scholarly comprehension and comprehensiveness that marks this work as obviously classic now as when it first appeared in 1921. The linkage and unity of mathematics and philosophy suggest the outline for the entire history. Heath covers in sequence Greek numerical notation, Pythagorean arithmetic, Thales and Pythagorean geometry, Zeno, Plato, Euclid, Aristarchus, Archimedes, Apollonius, Hipparchus and trigonometry, Ptolemy, Heron, Pappus, Diophantus of Alexandria and the algebra. Interspersed are sections devoted to the history and analysis of famous problems: squaring the circle, angle trisection, duplication of the cube, and an appendix on Archimedes's proof of the subtangent property of a spiral. The coverage is everywhere thorough and judicious; but Heath is not content with plain exposition: It is a defect in the existing histories that, while they state generally the contents of, and the main propositions proved in, the great treatises of Archimedes and Apollonius, they make little attempt to describe the procedure by which the results are obtained. I have therefore taken pains, in the most significant cases, to show the course of the argument in sufficient detail to enable a competent mathematician to grasp the method used and to apply it, if he will, to other similar investigations.Mathematicians, then, will rejoice to find Heath back in print and accessible after many years. Historians of Greek culture and science can renew acquaintance with a standard reference; readers in general will find, particularly in the energetic discourses on Euclid and Archimedes, exactly what Heath means by impressive and awe-inspiring.