Want to listen to the audiobook Climb to Conquer: The Untold Story of WWII's 10th Mountain Division written by Peter Shelton?
MP3 Audiobook Player is here to help! 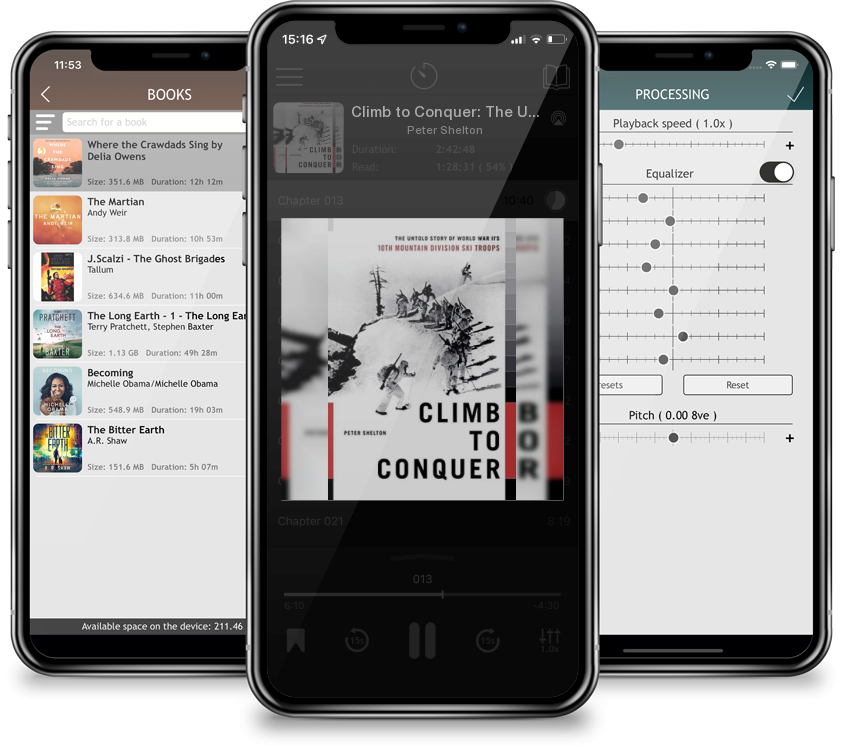 Few stories from the "greatest generation" are as unforgettable -- or as little known -- as that of the 10th Mountain Division. Today a versatile light infantry unit deployed around the world, the 10th began in 1941 as a crew of civilian athletes with a passion for mountains and snow. In this vivid history, adventure writer Peter Shelton follows the unique division from its conception on a Vermont ski hill, through its dramatic World War II coming-of-age, to the ultimate revolution it inspired in American outdoor life.In the late-1930s United States, rock climbing and downhill skiing were relatively new sports. But World War II brought a need for men who could handle extreme mountainous conditions -- and the elite 10th Mountain Division was born. Everything about it was unprecedented: It was the sole U.S. Army division trained on snow and rock, the only division ever to grow out of a sport. It had an un-matched number of professional athletes, college scholars, and potential officer candidates, and as the last U.S. division to enter the war in Europe, it suffered the highest number of casualties per combat day. This is the 10th's surprising, suspenseful, and often touching story.Drawing on years of interviews and research, Shelton re-creates the ski troops' lively, extensive, and sometimes experimental training and their journey from boot camp to the Italian Apennines. There, scaling a 1,500-foot "unclimbable" cliff face in the dead of night, they stunned their enemy and began the eventual rout of the German armies from northern Italy.It was a self-selecting elite, a brotherhood in sport and spirit. And those who survived (including the Sierra Club's David Brower, Aspen Skiing Corporation founder Friedl Pfeifer, and Nike cofounder Bill Bowerman, who developed the waffle-sole running shoe) turned their love of mountains into the thriving outdoor industry that has transformed the way Americans see (and play in) the natural world.