Want to listen to the audiobook Democracy Defined: The Manifesto written by Kenn D'Oudney?
MP3 Audiobook Player is here to help! 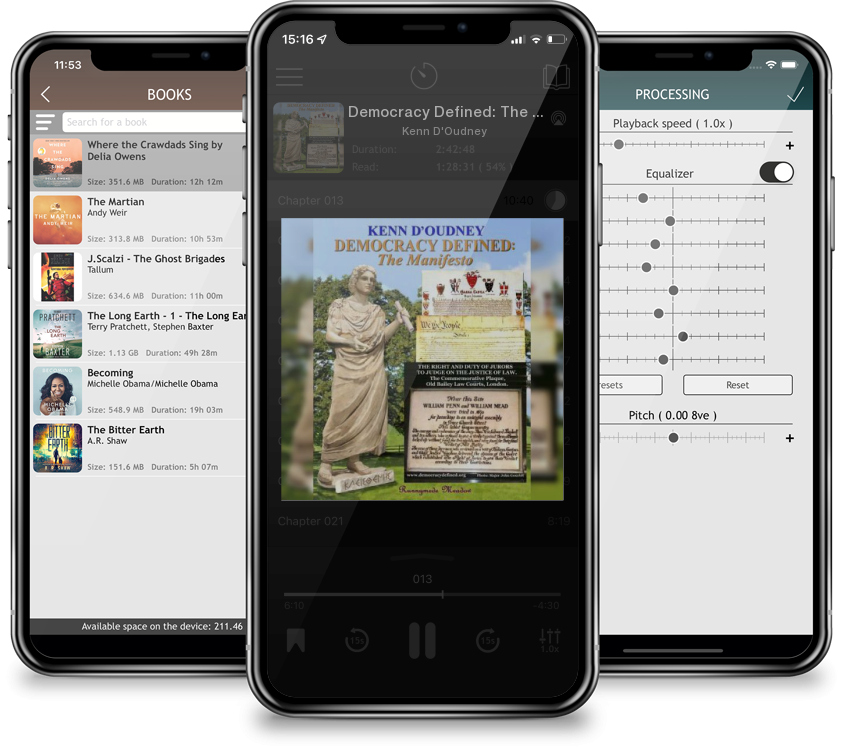 *TO OBTAIN LATEST 7th NOVEMBER, 2016 EDITION CLICK ABOVE ON "SEE ALL 4 FORMATS AND EDITIONS" & THEN ON THE ARROW NEXT TO "PAPERBACK."* SO, YOU THINK YOU KNOW WHAT 'DEMOCRACY' MEANS? The word 'democracy' is widely abused and 'defined' incorrectly. This eye-opening book explains exactly what the word democracy really implies. It demonstrates just how illegal the current situation is, adversely affecting the lives and livelihood of nearly all men and women today. DEMOCRACY DEFINED has been comprehensively researched and sheds light on how the repression of definitive democracy leads to a variety of far-reaching adverse effects, including political assassinations; fraudulent banking practices; and the unconstitutional denial of national issuance of interest-free currency and credit. The book also exposes the tiology of anti-Semitism. SEE BACK COVER for REVIEWS of the essays on which this book is based. This book gives citizens all the facts they require to appreciate how and why the current system is wrong and sets out what We the People can do to rectify it. The contents of DEMOCRACY DEFINED: The Manifesto are enriched by the fascinating quoted wisdom and words of great minds - Churchill, Gibbon, Hale, Hallam, Hume, Blackstone, Crabbe, Millar, Mackintosh, Gilbert, Palgrave, Coke et al., chief justices, judges, Benjamin Franklin, Presidents Kennedy, Roosevelt, Adams, Jefferson, Madison, Washington, Lincoln. This extensively researched book is enlightening - it reveals in irrefutable detail how far the modern political establishment and justice system have strayed from the prescribed lawful modus operandi. While establishing evidence for the legal case against governments' statism, THE MANIFESTO also gives readers inspiration and hope by showing how it is easily possible to reverse the decline and make mankind's ideal society achievable: the best of all possible worlds.