Want to listen to the audiobook Dickey Chapelle Under Fire: Photographs by the First American Female War Correspondent Killed in Action written by John Garofolo?
MP3 Audiobook Player is here to help! 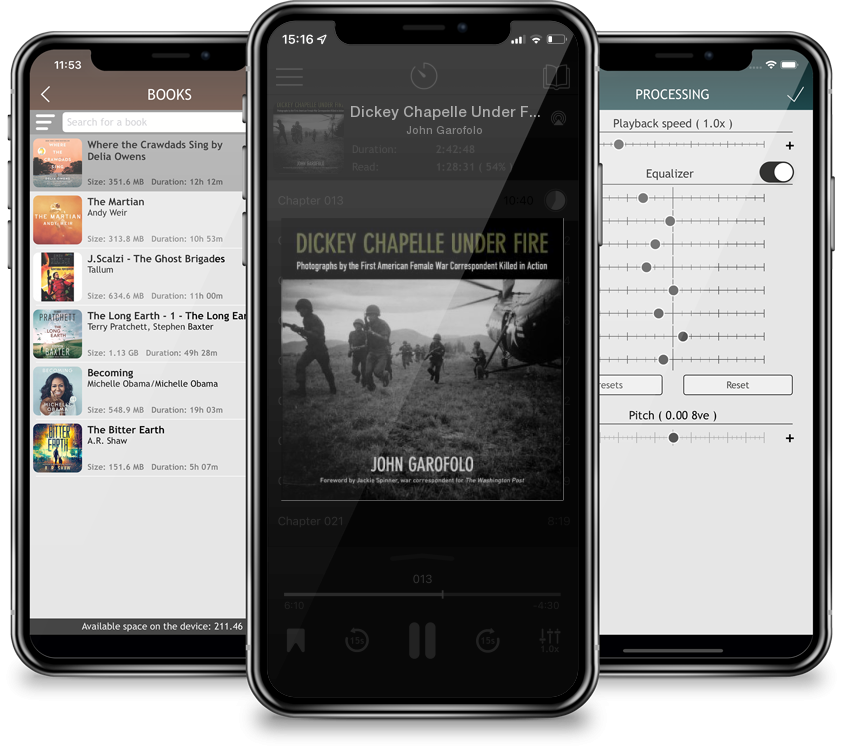 "It was dawn before I fell asleep, and later in the morning I was only half-awake as I fed a fresh sheet of paper into the typewriter and began to copy the notes from the previous day out of my book. But I wasn't too weary to type the date line firmly as if I'd been writing date lines all my life:from the front at iwo jima march 5-- Then I remembered and added two words.under fire-- They looked great." In 1965, Wisconsin native Georgette "Dickey" Chapelle became the first female American war correspondent to be killed in action. Now, "Dickey Chapelle Under Fire" shares her remarkable story and offers readers the chance to experience Dickey's wide-ranging photography, including several photographs taken during her final patrol in Vietnam. Dickey Chapelle fought to be taken seriously as a war correspondent and broke down gender barriers for future generations of female journalists. She embedded herself with military units on front lines around the globe, including Iwo Jima and Okinawa, the Dominican Republic, and Vietnam. Dickey sometimes risked her life to tell the story--after smuggling aid to refugees fleeing Hungary, she spent almost two months in a Hungarian prison. For twenty-five years, Dickey's photographs graced the pages of "National Geographic," the "National Observer," "Life," and others. Her tenacity, courage, and compassion shine through in her work, highlighting the human impact of war while telling the bigger story beyond the battlefield. In "Dickey Chapelle Under Fire," the American public can see the world through Dickey's lens for the first time in almost fifty years, with a foreword by Jackie Spinner, former war correspondent for "The Washington Post."