Want to listen to the audiobook Eliot Ness and the Mad Butcher: Hunting a Serial Killer at the Dawn of Modern Criminology written by Max Allan Collins?
MP3 Audiobook Player is here to help! 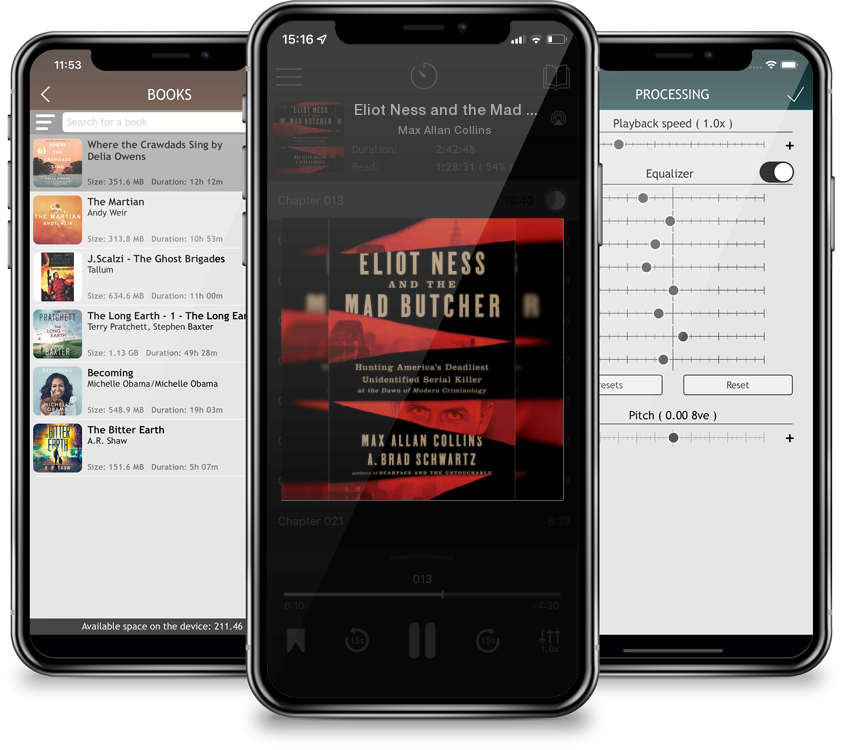 Eliot Ness and the Mad Butcher: Hunting a Serial Killer at the Dawn of Modern Criminology

"The thrilling history of the torso murderer. The tale of the ‘Untouchable’ who got Al Capone but failed to solve his goriest case." —Dan Jones, The Sunday TimesIn the spirit of Devil in the White City comes a true detective tale of the highest standard: the haunting story of Eliot Ness's forgotten final case–his years-long hunt for "The Mad Butcher of Kingsbury Run," a serial killer who terrorized Cleveland through the Great Depression. “After helping to put Al Capone behind bars, lawman Eliot Ness came to Cleveland, where he did battle with a vicious killer. ... Even Ness was stumped trying to apprehend the ‘torso murderer’ responsible for a series of ghoulish killings. ... The authors have done Ness justice." —Wall Street JournalIn 1934, the nation’s most legendary crime-fighter–fresh from taking on the greatest gangster in American history–arrived in Cleveland, a corrupt and dangerous town about to host a world's fair. It was to be his coronation, as well as the city's. Instead, terror descended, as headless bodies started turning up. The young detective, already battling the mob and crooked cops, found his drive to transform American policing subverted by a menace largely unknown to law enforcement: a serial murderer.Eliot Ness's greatest case had begun. Now, Max Allan Collins and A. Brad Schwartz–the acclaimed writing team behind Scarface and the Untouchable–uncover this lost crime epic, delivering a gripping and unforgettable nonfiction account based on decades of groundbreaking research.Ness had risen to fame in 1931 for leading the “Untouchables,” which helped put Chicago’s Al Capone behind bars. As Cleveland's public safety director, in charge of the police and fire departments, Ness offered a radical new vision for better law enforcement. Crime-ridden and devastated by the Depression, Cleveland was preparing for a star-turn itself: in 1936, it would host the "Great Lakes Exposition," which would be visited by seven million people. Late in the summer of 1934, however, pieces of a woman’s body began washing up on the Lake Erie shore–first her ribs, then part of her backbone, then the lower half of her torso. The body count soon grew to five, then ten, then more, all dismembered in gruesome ways.As Ness zeroed in on a suspect–a doctor tied to a prominent political family–powerful forces thwarted his quest for justice. In this battle between a flawed hero and a twisted monster–by turns horror story, political drama, and detective thriller–Collins and Schwartz find an American tragedy, classic in structure, epic in scope.