Want to listen to the audiobook Guilt by Matrimony: A Memoir of Love, Madness, and the Murder of Nancy Pfister written by Daleen Berry?
MP3 Audiobook Player is here to help! 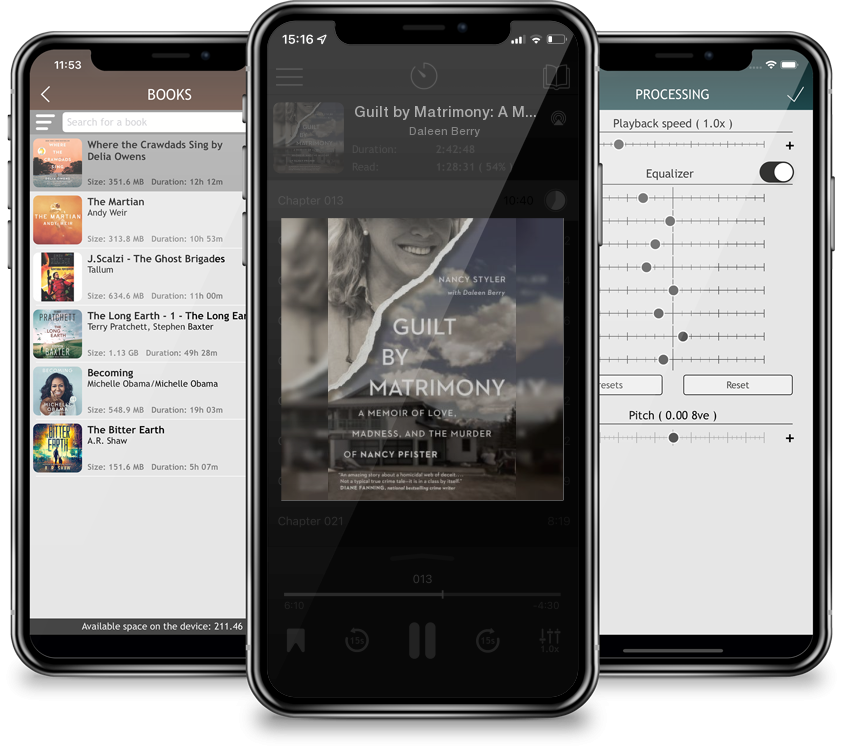 Guilt by Matrimony: A Memoir of Love, Madness, and the Murder of Nancy Pfister

In February 2014, Aspen socialite Nancy Pfister was murdered in her own home—brutally bludgeoned, wrapped in a sheet, and stuffed inside a locked closet. The question was: Who did it? Fewer than twelve hours after her body was found and without any evidence, police decided a married couple from Denver had killed her. Within a few days, they arrested and charged Nancy Styler, a friend of Pfister's who'd had a falling out with her after a business deal went sour, and Dr. Trey Styler, Nancy's disabled husband, who recently lost the family home, his medical practice, and any hope of a peaceful retirement for himself and his wife. Eleven days later, police also arrested and charged Kathy Carpenter, Pfister's underpaid and overworked personal assistant and closest friend.Months later, Trey Styler, who was slowly losing his grip on reality as he battled with mental illness, confessed to the crime. Rampant speculation spread about whether he was involved at all—or if his confession was that of a man on his deathbed—because a medical condition appeared to have left him barely able to walk, much less carry out such a heinous crime.In Guilt by Matrimony, Styler's widow, Nancy, reveals the answers to the biggest mysteries of this case and recounts the trauma of being falsely accused and imprisoned for a first-degree murder she had no knowledge of. And, in the only interview before his death, Trey gives his account of that fateful day.New York Times bestselling author Daleen Berry covers this compelling story from the inside, following the Stylers from their fairy-tale life in Denver to the morning of their simultaneous arrest to Nancy's release from jail and her attempts to rebuild her shattered life. Filled with details from exclusive interviews, a close look at the botched small-town police work, and first-person accounts of what really happened, Guilt by Matrimony is the definitive look at a shocking murder that rocked Aspen.