Want to listen to the audiobook Known and Strange Things: Essays written by Teju Cole?
MP3 Audiobook Player is here to help! 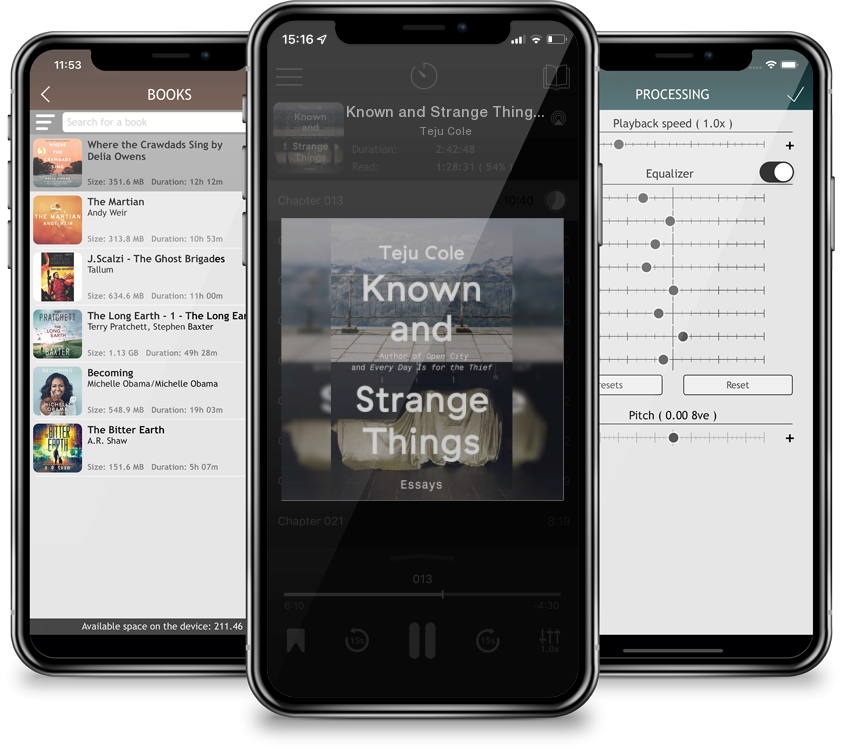 A blazingly intelligent first book of essays from the award-winning author of Open City and Every Day Is for the ThiefNAMED ONE OF THE BEST BOOKS OF THE YEAR BYTime • The Guardian • Harper's Bazaar • San Francisco Chronicle • The Atlantic • Financial Times • KirkusFinalist for the PEN/Diamonstein-Spielvogel Award for the Art of the Essay and PEN/Jean Stein Book Award With this collection of more than fifty pieces on politics, photography, travel, history, and literature, Teju Cole solidifies his place as one of today’s most powerful and original voices. On page after page, deploying prose dense with beauty and ideas, he finds fresh and potent ways to interpret art, people, and historical moments, taking in subjects from Virginia Woolf, Shakespeare, and W. G. Sebald to Instagram, Barack Obama, and Boko Haram. Cole brings us new considerations of James Baldwin in the age of Black Lives Matter; the African American photographer Roy DeCarava, who, forced to shoot with film calibrated exclusively for white skin tones, found his way to a startling and true depiction of black subjects; and (in an essay that inspired both praise and pushback when it first appeared) the White Savior Industrial Complex, the system by which African nations are sentimentally aided by an America “developed on pillage.” Persuasive and provocative, erudite yet accessible, Known and Strange Things is an opportunity to live within Teju Cole’s wide-ranging enthusiasms, curiosities, and passions, and a chance to see the world in surprising and affecting new frames.Praise for Known and Strange Things“On every level of engagement and critique, Known and Strange Things is an essential and scintillating journey.”—Claudia Rankine, The New York Times Book Review (Editors’ Choice)“A heady mix of wit, nostalgia, pathos, and a genuine desire to untangle the world, or at the least, to bask in its unending riddles.”—The Atlantic“Brilliant . . . [Known and Strange Things] reveals Cole’s extraordinary talent and his capacious mind.”—Time“[Known and Strange Things] showcases the magnificent breadth of subjects [Cole] is able to plumb with . . . passion and eloquence.”—Harper’s Bazaar“[Cole is] one of the most vibrant voices in contemporary writing.”—LA Times“Cole has fulfilled the dazzling promise of his novels Every Day Is for the Thief and Open City. He ranges over his interests with voracious keenness, laser-sharp prose, an open heart and a clear eye.”—The Guardian“Remarkably probing essays . . . Cole is one of only a very few lavishing his focused attention on that most approachable (and perhaps therefore most overlooked) art form, photography.”—Chicago Tribune“There’s almost no subject Cole can’t come at from a startling angle. . . . His [is a] prickly, eclectic, roaming mind.”—The Boston Globe“[Cole] brings a subtle, layered perspective to all he encounters.”—Vanity Fair“In page after page, Cole upholds the sterling virtue of good writing combined with emotional and intellectual engagement.”—The New Statesman“[Known and Strange Things possesses] a passion for justice, a deep sympathy for the poor and the powerless around the world, and a fiery moral outrage.”—Poets and Writers