Want to listen to the audiobook A Prayer Before Dawn: My Nightmare in Thailand's Prisons written by Billy Moore?
MP3 Audiobook Player is here to help! 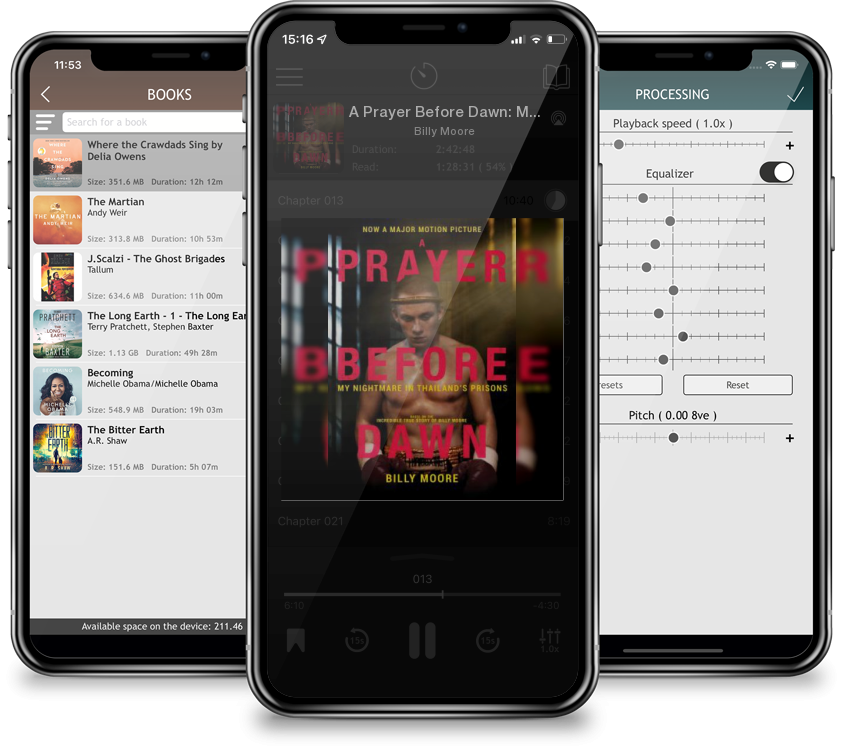 A Prayer Before Dawn: My Nightmare in Thailand's Prisons

Now a major motion picture! The true story of Billy Moore’s struggle to survive in Thailand’s notorious “Bangkok Hilton” prison. “Has heartfelt elements of self-betterment, vulnerability, and moments of strength that gave his character depth and a believable connection with the reader." —JetLi.comThe first time Billy Moore walked into his cell packed with seventy prisoners, the floor resembled a mass grave, with intertwined arms and legs, and the smell of human feces was so strong he almost vomited. That night, he slept next to a dead man. It wouldn’t be the last time.Behind the walls of Klong Prem “Bangkok Hilton” prison, life has no value. Overcrowded cells are a breeding ground for HIV, TB, dengue fever, and hepatitis, and the conditions are putrid and brutal. In an environment where drugs, murder, rape, and corruption run rampant, Moore fights to stay afloat above madness and his inner demons.A few years before, Moore had traveled to Thailand to escape a life of heroin addiction and alcoholism in England. In an attempt to stay straight, he became a professional Muay Thai boxer, worked as an extra in Rambo alongside Sylvester Stallone, and even fell in love. However, in the poverty-stricken back streets of Chiang Mai, Moore’s life quickly descended back into chaos when he relapsed after trying ya ba, the deadly crack cocaine of Southeast Asia.Moore was imprisoned first in Chiang Mai Central Prison and later in Klong Prem prison, a hellhole of filth and horror that very few will ever experience and none would want to see again.As a “farang” (foreigner), Moore struggles to survive the prison’s atrocities by making strategic friends, fighting in the prison’s Muay Thai boxing team, and even converting to Islam and praying five times a day. However, what requires more stamina and grit than any of his boxing matches is not just dealing with dangerous Thai criminals that lurk behind prison walls, but also resisting his addictions in an environment where drugs run plenty and wrestling with guilt.A Prayer Before Dawn is no ordinary prison memoir; it’s the story of one man’s survival amid inhumane circumstances and, most importantly, his redemption in the most unlikely of places.