Want to listen to the audiobook Garbo written by Robert Gottlieb?
MP3 Audiobook Player is here to help! 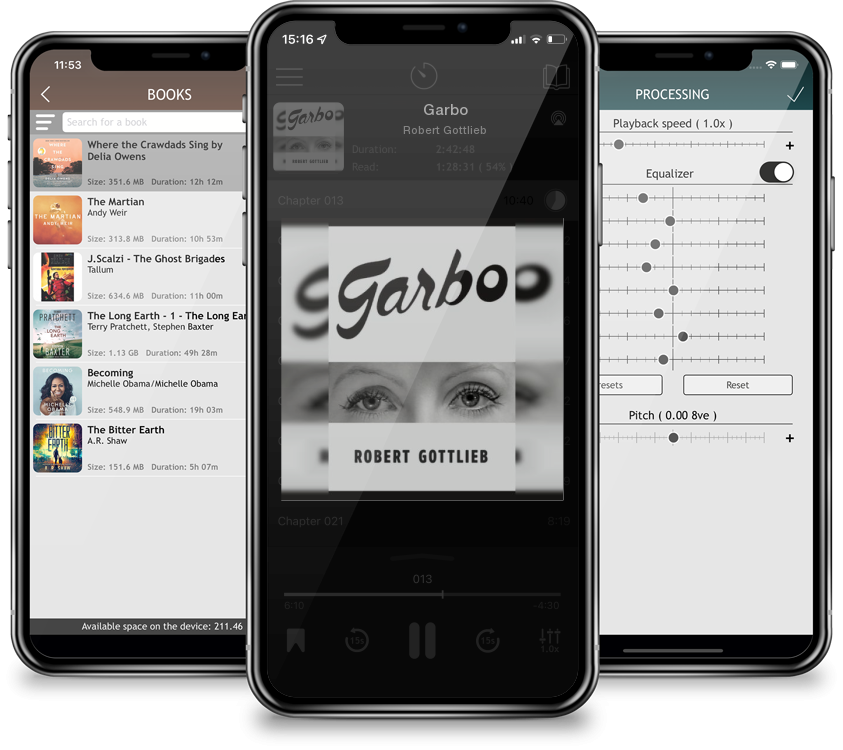 A New York Times Book Review Editors' Choice | One of Literary Hub's most anticipated books of 2021Award-winning master critic Robert Gottlieb takes a singular and multifaceted look at the life of silver screen legend Greta Garbo, and the culture that worshiped her.“Wherever you look in the period between 1925 and 1941,” Robert Gottlieb writes in Garbo, “Greta Garbo is in people’s minds, hearts, and dreams.” Strikingly glamorous and famously inscrutable, she managed, in sixteen short years, to infiltrate the world’s subconscious; the end of her film career, when she was thirty-six, only made her more irresistible. Garbo appeared in just twenty-four Hollywood movies, yet her impact on the world—and that indescribable, transcendent presence she possessed—was rivaled only by Marilyn Monroe’s. She was looked on as a unique phenomenon, a sphinx, a myth, the most beautiful woman in the world, but in reality she was a Swedish peasant girl, uneducated, naïve, and always on her guard. When she arrived in Hollywood, aged nineteen, she spoke barely a word of English and was completely unprepared for the ferocious publicity that quickly adhered to her as, almost overnight, she became the world’s most famous actress.In Garbo, the acclaimed critic and editor Robert Gottlieb offers a vivid and thorough retelling of her life, beginning in the slums of Stockholm and proceeding through her years of struggling to elude the attention of the world—her desperate, futile striving to be “left alone.” He takes us through the films themselves, from M-G-M’s early presentation of her as a “vamp”—her overwhelming beauty drawing men to their doom, a formula she loathed—to the artistic heights of Camille and Ninotchka (“Garbo Laughs!”), by way of Anna Christie (“Garbo Talks!”), Mata Hari, and Grand Hotel. He examines her passive withdrawal from the movies, and the endless attempts to draw her back. And he sketches the life she led as a very wealthy woman in New York—“a hermit about town”—and the life she led in Europe among the Rothschilds and men like Onassis and Churchill. Her relationships with her famous co-star John Gilbert, with Cecil Beaton, with Leopold Stokowski, with Erich Maria Remarque, with George Schlee—were they consummated? Was she bisexual? Was she sexual at all? The whole world wanted to know—and still wants to know.In addition to offering his rich account of her life, Gottlieb, in what he calls “A Garbo Reader,” brings together a remarkable assembly of glimpses of Garbo from other people’s memoirs and interviews, ranging from Ingmar Bergman and Tallulah Bankhead to Roland Barthes; from literature (she turns up everywhere—in Hemingway’s For Whom the Bell Tolls, in Evelyn Waugh, Graham Greene, and the letters of Marianne Moore and Alice B. Toklas); from countless songs and cartoons and articles of merchandise. Most extraordinary of all are the pictures—250 or so ravishing movie stills, formal portraits, and revealing snapshots—all reproduced here in superb duotone. She had no personal vanity, no interest in clothes and make-up, yet the story of Garbo is essentially the story of a face and the camera. Forty years after her career ended, she was still being tormented by unrelenting paparazzi wherever she went.Includes Black-and-White Photographs