Want to listen to the audiobook Laughing Without an Accent: Adventures of a Global Citizen written by Firoozeh Dumas?
MP3 Audiobook Player is here to help! 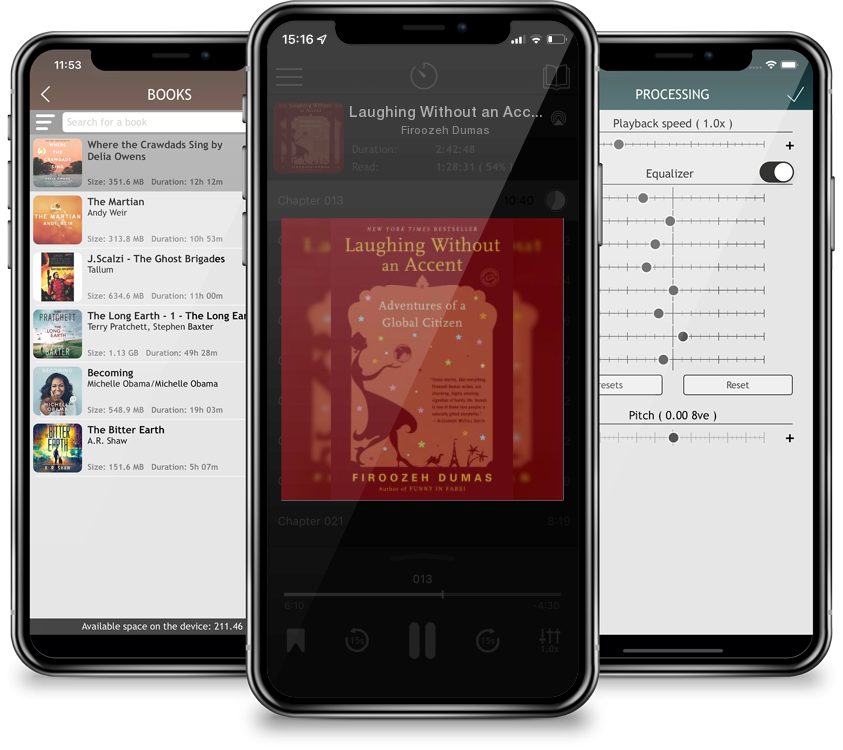 Laughing Without an Accent: Adventures of a Global Citizen

NEW YORK TIMES BESTSELLER • “There’s such warmth to Dumas’ writing that it invites the reader to pull up a seat at her table and smile right along with her at the quirks of her family and Iranians and Americans in general.”—BooklistIn the New York Times bestselling memoir Funny in Farsi, Firoozeh Dumas recounted her adventures growing up Iranian American in Southern California. Now she again mines her rich Persian heritage in Laughing Without an Accent, sharing stories both tender and humorous on being a citizen of the world, on her well-meaning family, and on amusing cultural conundrums, all told with insights into the universality of the human condition. (Hint: It may have to do with brushing and flossing daily.) With dry wit and a bold spirit, Dumas puts her own unique mark on the themes of family, community, and tradition. She braves the uncommon palate of her French-born husband and learns the nuances of having her book translated for Persian audiences (the censors edit out all references to ham). And along the way, she reconciles her beloved Iranian customs with her Western ideals. Explaining crossover cultural food fare, Dumas says, “The weirdest American culinary marriage is yams with melted marshmallows. I don’t know who thought of this Thanksgiving tradition, but I’m guessing a hyperactive, toothless three-year-old.” On Iranian wedding anniversaries: “It just initially seemed odd to celebrate the day that ‘our families decided we should marry even though I had never met you, and frankly, it’s not working out so well.’” On trying to fit in with her American peers: “At the time, my father drove a Buick LeSabre, a fancy French word meaning ‘OPEC thanks you.’” Dumas also documents her first year as a new mother, the familial chaos that ensues after she removes the television set from the house, the experience of taking fifty-one family members on a birthday cruise to Alaska, and a road trip to Iowa with an American once held hostage in Iran. Droll, moving, and relevant, Laughing Without an Accent shows how our differences can unite us—and provides indelible proof that Firoozeh Dumas is a humorist of the highest order.Praise for Laughing Without an Accent   “Dumas is one of those rare people: a naturally gifted storyteller.”—Alexander McCall Smith   “Laughing Without an Accent is written . . . as if Dumas were sharing a cup of coffee with her reader as she relates her comic tales. . . . Firoozeh Dumas exudes undeniable charm [as she] reveals a zeal for culture—both new and old—and the enduring bonds of a family filled with outsize personalities.”—San Francisco Chronicle   “[Dumas is] like a blend of Anne Lamott and Erma Bombeck.”—Bust   “Humorous without being sentimental, [Dumas] speaks to the American experience.”—The Plain Dealer