Want to listen to the audiobook Magnifico: The Brilliant Life and Violent Times of Lorenzo de' Medici written by Miles J. Unger?
MP3 Audiobook Player is here to help! 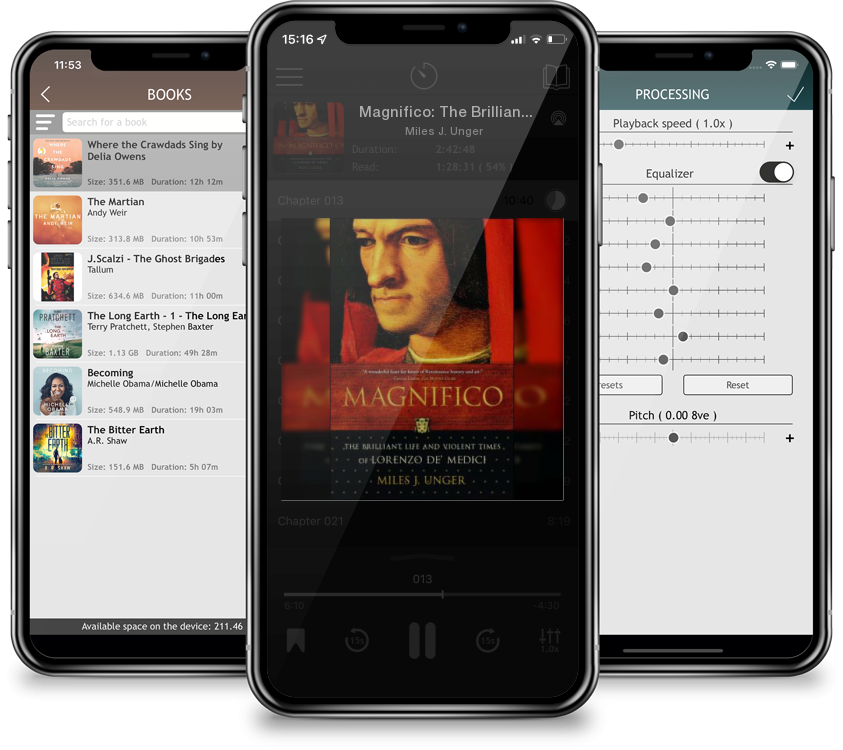 Magnifico is a vividly colorful portrait of Lorenzo de' Medici, the uncrowned ruler of Florence during its golden age. A true "Renaissance man," Lorenzo dazzled contemporaries with his prodigious talents and magnetic personality. Known to history as Il Magnifico (the Magnificent), Lorenzo was not only the foremost patron of his day but also a renowned poet, equally adept at composing philosophical verses and obscene rhymes to be sung at Carnival. He befriended the greatest artists and writers of the time -- Leonardo, Botticelli, Poliziano, and, especially, Michelangelo, whom he discovered as a young boy and invited to live at his palace -- turning Florence into the cultural capital of Europe. He was the leading statesman of the age, the fulcrum of Italy, but also a cunning and ruthless political operative. Miles Unger's biography of this complex figure draws on primary research in Italian sources and on his intimate knowledge of Florence, where he lived for several years. Lorenzo's grandfather Cosimo had converted the vast wealth of the family bank into political power, but from his earliest days Lorenzo's position was precarious. Bitter rivalries among the leading Florentine families and competition among the squabbling Italian states meant that Lorenzo's life was under constant threat. Those who plotted his death included a pope, a king, and a duke, but Lorenzo used his legendary charm and diplomatic skill -- as well as occasional acts of violence -- to navigate the murderous labyrinth of Italian politics. Against all odds he managed not only to survive but to preside over one of the great moments in the history of civilization. Florence in the age of Lorenzo was a city of contrasts, of unparalleled artistic brilliance and unimaginable squalor in the city's crowded tenements; of both pagan excess and the fire-and-brimstone sermons of the Dominican preacher Savonarola. Florence gave birpth to both the otherworldly perfection of Botticelli's Primavera and the gritty realism of Machiavelli's The Prince. Nowhere was this world of contrasts more perfectly embodied than in the life and character of the man who ruled this most fascinating city.